After an hour’s drive out from the town square, we arrived in a small village center where the school was located. It was monsoon season, meaning hot mornings and wet afternoons on good days and typhoons and days of downpours on bad days. Naturally, the slick and muddy dirt road made the trek hazardous, and one of the vans had to stay behind. Finally, we got through the mud and found the school. Children’s eyes gazed out between the paint chipped shutters from the classroom. I saw glimpses of smiles and jet black hair radiating as the midday sun scorched the tin roof. I could see little mud stained feet shuffling around through a large hole on the side of the building. It was difficult to tell which group was more excited to meet the other. 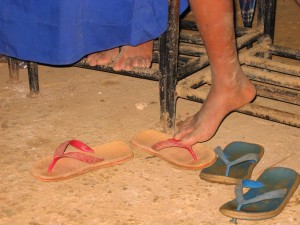 We stepped into the classroom and immediately felt the humid air hit the backs of our necks. What a sauna! I wondered how it was possible to focus in such suffocating heat without even an electric fan to ease the humidity.

The mayor’s official introduced Rick and I as we walked to the front of the room. Just as Rick began his message in Tagalog, a few rain drops fell. I noticed a large hole in the middle of the ceiling and suddenly realized there were no lights. Many children weren’t even wearing shoes. As Rick continued talking to the children, suddenly, he was interrupted by an enormous downpour of rain. The rain fell so heavy that the shouting of his voice eventually became muffled, blending in with the sound of raindrops falling. It grew dark, and I could barely make out the children’s faces. A puddle grew in the middle of the room, just in front of the first row. The teacher yelled that class was temporarily stopped until the teacher’s voice could be heard again. Some children studied their workbooks. Many waited patiently for several minutes just to borrow their neighbor’s pencil or pen. Looking around the classroom, I noticed a few kids looked quite mature for that grade level. After speaking with a teacher I was informed that they could not afford to attend school every year and had to work every other year or two before returning for the following school year. One sixth grader was eighteen years old. 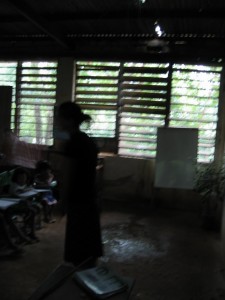